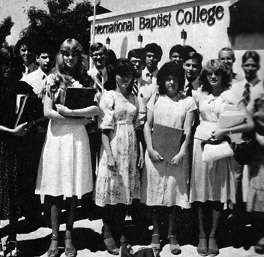 International Baptist College (IBC) opened its doors for its first semester on September 8, 1981. However, the College really began several years earlier in the heart of its founder, Dr. James Singleton. Dr. Singleton and his family came to the Valley of the Sun in 1969. Soon, he had begun and organized Tri-City Baptist Church, an independent, soul-winning church upon which many ministries would be established.

Early in the 1970s, Dr. Singleton became aware of the negative direction of public education in America and as a result established Tri-City Christian Academy. Now, with a growing church and an alternative to elementary and secondary public education also growing, the next phase was about to begin.

As Dr. Singleton became more acquainted with the West, he began to realize that there were very few places to train young men and women for the gospel ministries of church planting, evangelism, missions, and Christian education. His heart became more and more burdened for the establishment of a school that would uniquely meet the needs of the West, yet become international in scope and ministry.

Late in 1979, Dr. Singleton enlisted the help of Dr. Jerry Tetreau, administrator of Tri-City Christian Academy, to begin the initial steps necessary in establishing a Bible college as a ministry of Tri-City Baptist Church. In October of 1980, with many hours of prayer and planning behind it, Tri-City Baptist Church voted to organize International Baptist College. Classes began in the fall of 1981.

Very quickly the next steps were planned. It was decided that the campus would be housed in the facilities of Tri-City Baptist Church. Teaching responsibilities would be shared with both full-time church staff and academy faculty on a part-time basis. Letters were sent to hundreds of churches and Christian schools announcing the opening of the College.

In that first year, International Baptist College began with fifteen full-time students. These students were matriculated from Arizona, Illinois, Iowa, and California. In this initial year, three young ladies occupied the dormitory house. The following year, a men’s dormitory house was also established. Several years later, the College was able to purchase a lovely home for dormitory use.

The facilities expanded because the student body grew, the full-time faculty increased, and the academic programs broadened. The 600-seat TBC auditorium was finished in 1981. The media center increased in physical size as well as in volumes. The student center was completed housing a lounge and recreation area as well as dining facilities for dorm students. After 1990 a family life center was completed. This building housed a 600-seat gymnasium, a state-of-the-art kitchen, a large fellowship hall, and four classrooms.

The church completed the education building in 1995. This building provided classrooms, a chapel, and fellowship space for the College and singles’ ministry.

Financially, for years the College was able to complete every school year in the black. Tri-City Baptist Church made IBC a home missionary project and has been the undergirding strength of the financial support. In addition, many friends and fellow churches have begun making IBC a regular part of their budgets. Several student aid scholarships have been made available as a result of the burden carried by these friends of the College.

Upon completion of a detailed self-study of the many facets of the College, the Transnational Association of Christian Schools and Colleges (TRACS: P.O. Box 328, Forest, Virginia 24551, 804-525-9539) granted International Baptist College the Candidacy level of accreditation in October 1994, at which time Dr. Jerry Tetreau became President. IBC completed another self-study in February 2000 and achieved TRACS-accredited status on September 20, 2000.

On April 14, 2002, Tri-City Baptist Church voted unanimously to proceed with the IBC “Invest and Build for Eternity” project. At the time of the vote, the College had approximately $750,000 in assets for the project. The project, which was to be on the property at Price Road and Southern Avenue in Tempe, called for the building of a two-story academic wing added to the gymnasium, as well as a separate two-story dormitory. However, the Church voted on October 13, 2002, to seek to sell the Tempe property and to relocate the Church, College, and other ministries to Chandler, Arizona.

On Sunday, March 6, 2005, International Baptist College and Tri-City Baptist Church celebrated groundbreaking ceremonies on the new property at Dobson and Germann Roads. On July 13, 2005, construction began on Singleton Hall, the first College residence hall on the property. The College moved into this first building on July 29, 2006. The building of the residence hall was the first phase of the “Invest and Build for Eternity” project.

On November 29, 2005, after completing another Self Study, TRACS awarded IBC Reaffirmation I Status as a Category IV institution. This status was effective for a period of ten years.

In May of 2007, Dr. Jerry Tetreau became the Chancellor of IBC and David Brock became the third president of IBC. In October 2007, IBC was granted permission to restart the Master of Education degree, and in June 2008, classes for that degree began. Later that summer, Tri-City Baptist Church began to build the new church facility in Chandler. The last service in Tempe was held on August 16, 2009. The opening service was held on August 23, 2009, and opened the 2009-2010 school year on the new property.

The combined vision of Dr. Singleton, Dr. Sproul, and Dr. Tetreau continued to expand under Dr. Brock’s leadership. Through conferencing technology, IBC began to teach simultaneous classes on campus and in other states in the fall of 2009. Two years later, sites in California, New Mexico, and Colorado were added. IBC added a third undergraduate major: the Bachelor of Arts in Bible and Church Music in the fall of 2008.

In the fall of 2010, International Baptist College received TRACS approval on the Five-Year Quality Compliance Review and Report as well as the approval to restart the M.Div. program. In December 2010, the music wing of the main church building was named The Davis Music Wing in honor of the late Tiffany Davis Brock. In October of 2011, the College changed its name to International Baptist College and Seminary.

IBCS expanded the College Complex in the spring of 2011 by adding the Re:vive Student Center, the Heritage Chapel, the Stanley L. Bushey Administrative wing, and four classrooms. The Kay Downs Sproul Media Center, named in honor of TBC’s first librarian, was added to the complex and officially opened on May 6, 2012.

In December 2012, Dr. Brock began a new phase of ministry. At that time, International Baptist Missions Director, Dr. Larry Ball, accepted the role of Interim President while the Governing Board and Administration searched for a new President for the College and Seminary.

In October 2013, the Governing Board unanimously voted to approve Chairman Dr. Michael Sproul’s offer of the presidency to Pastor Kenneth M. Endean, a man with almost 30 years of ministry experience. In November 2013, Pastor Endean accepted Dr. Sproul’s offer. He and his family moved to Chandler, Arizona in July of 2014.

In 2015, several additional changes took place at IBCS. In January, IBCS received TRACS approval to partner with Tri-City Baptist Church in Westminster, Colorado, to open a Teaching Site on their campus, beginning with Seminary classes. Later that spring, Dr. David Shumate, director of Mission Gospel Ministries International joined the IBCS administration as an educational missionary to lead the seminary programs. That summer, IBCS announced a new accredited degree, the Bachelor of Arts in Bible and Business Leadership, and began the program that fall.

After years of preparation, IBCS presented itself to TRACS for reaffirmation of accreditation. On October 27, 2015, IBCS was granted Reaffirmation II status as a Category IV institution. This status is effective for a period of ten years.
After nearly 25 years of serving as the pastor of Tri-City Baptist Church and Chairman of the Board of International Baptist College and Seminary, Dr. Michael D. Sproul announced in the spring of 2019 that God had clearly worked and that he would be moving to Washington, D.C., to serve as the Command Chaplain of the U.S. Air National Guard. The church acknowledged and celebrated Pastor Mike and Elma Sproul’s service with Double Honor Sunday on April 28, 2019, with special services and a luncheon on the grounds with the church family. That date marked the end of Dr. Sproul’s term as Chairman of the Board of IBCS.

After reviewing several potential TBC pastoral candidates, the TBC pulpit committee requested that then-IBCS president and CEO, Dr. Ken Endean, consider the position of TBC pastor. After much prayerful consideration, Dr. Endean accepted the pulpit committee’s request and his name was brought before the church. On May 19, 2019, the TBC congregation voted that Dr. Endean become the third pastor of TBC and the third Chairman of Board of IBCS.

In July 2019, Dr. Endean asked the IBCS Governing Board to consider the next president of IBCS. Dr. Endean stated, “Pastor Nathan [Mestler] is an excellent Bible scholar, demonstrates a heart for missions, and has a great connection with our students and a desire to see them change and grow to be like Christ. Pastor Nathan is a sought-after speaker at Christian camps and has a good rapport with pastors and young people across the West.” In August 2019, the board voted to recommend to the TBC Deacons that Pastor Nathan Mestler be accepted as president, a recommendation that the TBC Deacons accepted. On February 23, 2020, TBC held an installation ceremony officially naming Pastor Nathan Mestler as the fifth president of IBCS.

IBCS continues to move forward in mentoring God-fearing leaders for Fundamental Baptist churches in the West and the world.